only one of these is not a real Ponzi scheme

(2 minute read + links to three articles, a book, a blog and a video)

Trump fatigue is a common aliment in infirmaries across America, hell around the world, and yet our addiction to Trump’s stranger-than-fiction, news keeps seducing our curiosity, despite the raging headache. Trump’s reality-TV series, “The US Presidency Apprenticeship,” is a bigger house of cards than Netflix’s blockbuster, House of Cards, and, perhaps, like the fictional drama, headed for an ignominious ending. 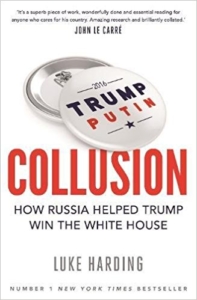 My recent blog about Trump (Is Trump a Russian Asset) had thousands of hits, which tells me a lot of people are still very interested in the deepening threat that Trump is to democracy. And it’s worth mentioning again, Trump is not the cause, he is the effect, the result, of an invidious trend playing out in more and more nations around the world, under the guise of “populism.” “Identity politics,” “tribal protectionism” and “nativism” are just other names for the same divisive battles fracturing “majority rule” – the foundation of democracy – by pitting minority interests against one and other.

For those of us who don’t want to miss the lead up to the final episodes of this unfolding, real-life drama, I’ve provided below links to three articles, plus another book, a video and a blog I wrote over a year ago, all of which are part of “the writing on the wall.”

The combination of the articles cited, Harding’s book and the video are a good summary that exposes much more of the iceberg for which the “US Titanic” could be headed – if the passengers don’t wake up.