Is Trump a Russian asset?

I find conspiracy theories somewhere between humorous – as in absurd – and disgusting – as in a waste of time. Primarily because a little due diligence easily debunks them. But what Jonathan Chait has written in the July 9, 2018 issue of New York magazine makes a point of staying away from the conspiracy theorist’s modus operandi of proclamation and certainty.

“A case like this presents an easy temptation for conspiracy theorists, but we can responsibly speculate as to what lies at the end of this scandal without falling prey to their fallacies.” – Jonathan Chait

Chait, a very credible journalist, op-ed columnist and author has offered up what he calls, “a plausible theory of mind-boggling collusion.” He simply sets out a narrative that is chock-full of facts, findings, events and characters, over a thirty year timeline, and leaves the interpretation up to the reader. It’s fascinating. It’s a professional presentation of a complex web of events and people, providing a clear window into three decades of Trump’s relationship with Russia. The story is probably more intriguing then any suspense novel you might currently be into. Great summer reading.

I suggest that if you read this article, your takeaway from the Helsinki Trump-Putin meeting may be radically altered. 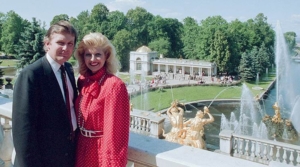 1987: Donald and Ivana Trump in Russia

I found the story clarifying and insightful, and I wanted to share it with as many people as possible, as close to the Trump-Putin meeting as possible. Because the Helsinki meeting is the next chapter in this, as of yet, unfinished story.

Will Trump Be Meeting With His Counterpart — Or His Handler? by Jonathan Chait