The contrasts are black and white and stark …

in everything from hope and anger to failure, character, leadership and friendship

Two men. Two Presidents. Two stories. Two books. Two Americas. Two visions (well, at least one). One rooted in hope and promise. One rooted in anger and self.

“So which kind of person do you want to be?” – Ann Dunham (Obama’s mother)

The most important fact exemplified in these books is not how these two men will matter across the sweep of history (they will), but that they represent and reflect the nature of America today, which, in the end, will matter most to our future. Barack Obama and Donald Trump are masterfully profiled, from their failure – and the contrast in handling failure – to leadership and character, but more importantly, their stories provide two different prisms through which we can see the stark contrasts between the beliefs, principles and views of over 150 million American voters. Two books and one expansive window into an America in conflict with itself.

These unprecedented ‘inside stories’ help explain where America is today and, more importantly, whether hope or anger will shape the future of the nation – not the Presidents’ hope and anger, Americans.

“I have a saying around here: In Bob we trust,” Jonathan Karp, CEO, Simon & Schuster 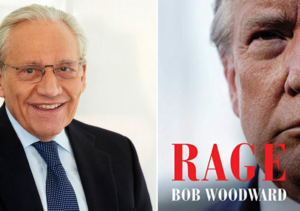 Obama’s book is autobiographical, a memoir, and Trump’s is a biography by Bob Woodward. But Woodward’s account is almost autobiographical because it’s based on hundreds of hours of recorded interviews that deliver Trump’s oral history, in his own words. As we know, Woodward is a master reporter and has written nine books on US presidents and religiously follows journalistic principles, reporting on facts only, avoiding voicing his opinion (except in the last sentence of Rage – see below). 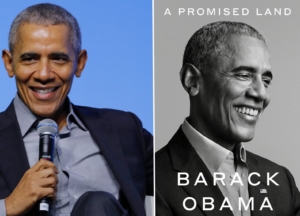 Obama’s book is a deep, personal reveal of his life, his time in office, and wide-eyed glimpses into the workings of an American President. The contrast between his achievement and his humility runs throughout the book and the reader feels like a friend listening to a good friend’s story – an honest, self-deprecating, humble friend who lives with a healthy balance of hope and doubt. He certainly leaves readers with high anticipation of the second volume.

The men are polar opposites and we get to see two views of America. And this is a good thing. Because for people on either side, who are in fiery opposition to each other, these stories are an opportunity to see their nation from the opposition’s perspective – if they so choose. It’s a chance to get out of the echo chambers of divisive information and perhaps find some objectivity in the other side of the story. Or not, and stay in self-buffering, narrow tunnels of opinion, comfortable in ‘safe rooms’ of self-fulfilling facts.

To read, or not to read. That is the question.

These two books should be on everyone’s bookshelf – at least those who think it’s important to understand America and the underlying forces shaping its future. Because we best see ourselves when we are set out in sharp contrast to those we believe are not like us. It helps us focus. It becomes black and white.

“If you don’t know where you’re going, any path will get you there.” – Jared Kushner explained Trump’s conduct by paraphrasing the Cheshire Cat’s advice to Alice in Wonderland

Of course, we all know Alice in Wonderland went down a rabbit hole, not dissimilar to the hole Trump has dug for America, which in Rage he describes in his own words and deeds, demeaning, defaming and exposing his true self. He unashamedly disqualifies himself. He admits that he has a talent for “enraging” people and that he’s not sure if its “an asset or a liability.” Regardless of its effect on him, it most definitely is a liability for the nation. And if is wasn’t self-evident before 2020, it was when the pandemic hit. 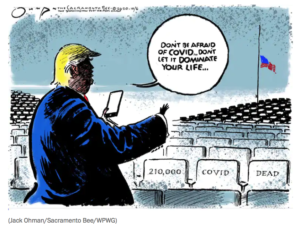 At the core of any assessment of the 45th President, this book is ‘exhibit A’ of his confession and self-indictment. He admitted to Woodward in February 2020, “It’s deadly stuff,’  and then proceeded to minimize it to Americans, saying, “I wanted to always play it down.” Worse, he allowed the pandemic to rage out of control.

Whether we support Trump or not, there’s no denying this egregious decision to create a “hoax” about a deadly pandemic and then spin it to Americans. He said, “It’s gonna go … It’s gonna leave … like a miracle,” while whistling past the graveyards of more than 250,000 fellow citizens. And he’s still MIA. It’s criminal.

Anyone who supports Trump and is sincere in wanting to understand the man they elected to the most powerful office in the world, should read this book. It’s Trump in his own words, not a hoax, not ‘fake news.’

“When his performance as president is taken in its entirety, I can only reach one conclusion: Trump is the wrong man for the job.” – Bob Woodward (last sentence in the book).

“Do we care to match the reality of America to it’s ideals?” – Barack Obama 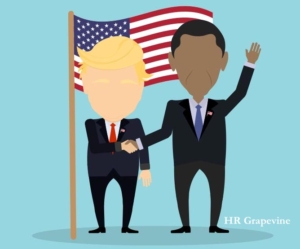 Hope is a good thing but it doesn’t necessarily solve anything – it feels good but nothing much changes. Anger, on the other hand, is not a good thing but it damn near always changes something – for better or worse. This book portrays inspiring hope and little anger in Obama’s thinking or life – the antithesis of Rage and Trump’s mindset and life – and describes his relentless search for, and belief in, something better.

At an early age, particularly when at Columbia University (age 22), Obama developed his ideal that America was the greatest country in the world, declaring, “I chafed against books that dismissed the notion of American exceptionalism.”

His fortitude and perseverance, amid personal uncertainty and questioning, is reinforced over and over in his commitment to everything he undertook, from community organizing in Chicago to the Situation Room in the White House. One of the true strengths of the man and the book is his frankness about his self-doubt and short-comings. It’s not only refreshing, it’s a sign of an indomitable character.

“This nation’s ideals have always been secondary to conquest and subjugation, a racist caste system and rapacious capitalism, and that to pretend otherwise is to be complicit in a game that was rigged from the start.” – Barack Obama

One of his notable traits is his capacity to see multiple sides of an issue, particularly the ones opposed to his. And as much as he acknowledges the deep flaws in the ‘American experiment,’ he forcefully declares, “I am, not yet ready to abandon the possibility of America – not just for the sake of future generations of Americans but for all humankind.

Whether his ideals are what he believes or what he wants to believe, they are an inspiring definition of American ‘hope.’ Something we would all like to hear from a good friend or a true leader.

Buy and enjoy both of these excellent books!