How does Trump con 72 million voters?

He gives them ‘hope’ in a swamp of meaninglessness

Trumpism is a religion, a belief, a cult of hope, no different than any religion (at least the few thousand outside the one we believe). Of course, worldwide, billions of people don’t ‘buy’ the Trump-con but inside the borders, “from shining sea to shining sea,” enough voters in 2016 (62.9 million) bought into the con to elect him and in 2020 it damn near happened again (72.3 million voters).

“I was the realization of their dreams. The idol. The hero. The master and arbiter of their lives.” – Charles Ponzi [Trump sees himself the same]. 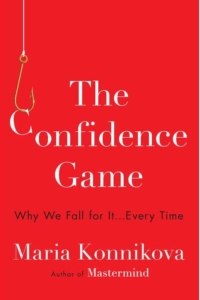 This book goes a long way to shutting down the dissonance in our minds that continually tries to explain why 30% of eligible American voters think Trump can be their “hero,” their “savior.”

The essence of every con is simple enough to highlight here and yet, it’s also complicated enough to fill a book. And there’s no better book than this New York Times bestseller, The Confidence Game by Maria Konnikova (written just before Trump’s MAGA con metastasized). She explains the ‘best’ of the infamous, from Bernie Madoff and Lance Armstrong to Jim Bakker and Charles Ponzi. How they do it. Why they’re successful. And most importantly, why ‘we’ keep falling for their cons. And make no mistake, we do.

We cannot understand 72 million people voting for Trump without also understanding the billions of dollars invested, by smart people, in Madoff’s scheme, or an entire sports world who cheered Lance Armstrong to seven consecutive Tour de France victories. Konnikova’s book is anchored in the reality that we humans are hardwired to develop belief systems that serve the primary purpose of giving us hope in a swamp of meaninglessness. Our brains have been working on it for at least a couple of hundred thousands years.

It’s not about being smart or stupid. Blind or dumb. It’s about our human need for hope, which manifests itself in a psychological and biological amalgam that cannot resist our need to believe in something, anything, that can keep us afloat above the abyss of meaninglessness. 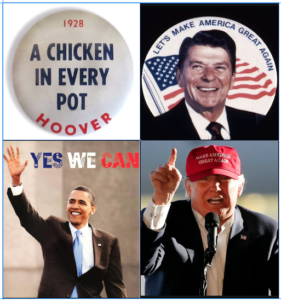 We all have and need hope. It gets us through almost everything. But it isn’t the same for everyone. Not by a long shot.

For some, hope is realized and reaffirmed, but for far too many, it’s a distant glimmer. Billions of people spend their lives climbing life’s mountain while watching too many people pass them by – most cutting in line at the top – and they see that the promises never ‘trickle down’ to their lower place on the mountain. Think of Bill Gate’s family versus George Floyd’s family. Or the Black Lives Matter movement versus the National Rifle Association’s lobby. And yet, we all keep hoping for something better.

The mirage of hope keeps most people going and when they vote they’re voting for the best chance of grabbing a small portion of eternal hope. Praying for heaven versus hell.

“Many cons flourish in the world of religious experience.” – Marie Konnikova

Hope, like heaven, is a divine force and when it becomes a belief it is not to be denied. Or explained. It is fertile ground for the con artist to create meaning amid the seemingly meaningless. As Konnikova shows, “We fall for them because it would make our lives better if the reality they proposed were indeed true. They give us a sense of purpose, of value, of direction.” Trump did this. He gave 72 million people who are lined up way down the mountain, a sense of value, direction, purpose and hope. And they bought into his confidence game.

Interestingly, Sam Harris and others have posited that Trump’s traits – seen by most as abhorrent and disgusting – actually make millions of his believers feel better. Trump’s lack of character and sins are a welcome mat for his ‘flock,’ regardless of their failings. He is filtered through a religious lens that ‘we’re all God’s children’ and accepted as we are. His appeal, his con, is no different than Jim Bakker, Jimmy Swaggart and dozens of other preachers and cons. No matter his sins, ‘we forgive him, as he forgives us. We see some of us in him.’

Hope organizes beliefs so that they become the matrix of our life, continually reinforcing eternal hope and, as Konnikova explains, our hopes jump over the threshold of rationality to the point where we simply believe.

72 million Americans believe the con because it offers them more hope than the reality. And cons like Trump prey on the reality – the fear, anger, disillusionment, disappointment, desperation, need.

Until the reality gets better for 72 million people, the con will work.