but one psycho-neurotic isn’t worth one vote, let alone 60 million (25% of eligible voters)!

Bravo to the Toronto Star and cartoonist Michael De Adder for an image that says what hundreds-of-millions of regular, hard working, common sense people all know, and want to shout from the roof tops: “Get this neurotic, unstable idiot out of my life and off my back – and neck … I can no longer breathe in the suffocating smog of retarded autocracy.” 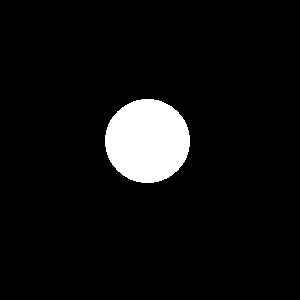 At the heart of the black problem is white.

Black racism is a white problem. And if you are white and don’t understand the problem and see no need to deal with it, then as the cliché goes, ‘You’re not part of the solution, you’re part of the problem.’

Maybe, just maybe, the murder of George Floyd has drawn a line in the sands-of-time and the sides have been defined. Finally, the sides are not black and white, they’re wrong and right. Now it’s a clear choice, not a twisted debate over law and order versus anarchy; not military versus citizens; not to-kneel-or-not-to-kneel; not looters versus shooters; it’s black and white. As clear as night and day. You’re either on the side of right or wrong. There are not “good people on both sides.” It’s an individual’s choice, there’s no gray, no rationalization, there’s just a choice.

George Floyd lost his life in less than 9 brutally cruel, completely unnecessary minutes. That can never be recovered, never minimized, never rationalized, never justified … and never be captured in a cartoon or joke. Other than to realize the real joke is in the trumped up divide created between us.

We actually think we are an evolved species, smarter than the other species, capable of creating a “good” society, a place where the majority of us can co-exist in a relatively safe and moral life. Sorry, it’s a joke. A lie. A myth. We’ve been talking about ‘equality’ for centuries and it’s still just talk. The 18th century “Enlightenment” and the American and French Revolutions declared – hypocritically – we were equal and would continue to get better. We haven’t.

What we have built is a society that is not a ‘safe place’ where ‘all men are created equal,’ nor, if you are a person of faith, is it a ‘house of god,’ made in his image. Rather it’s more like a rickety hen house where all we chickens cluck around laying eggs and having baby chicks while we let the foxes among us (mostly white roosters) build everything, make a fortune doing it, tell us they have our interests at heart, rape and pillage our villages, and kneel on our neck whenever they want. It’s an insidious joke.

“I look at the future from the depth of a very black past and I find that nothing is left for me except fidelity to a cause lost, to an idea without a future.” – Joseph Conrad (a bright white guy).

Joseph Conrad (1857-1924), was much more than a renowned novelist, he was an ardent skeptic of democracy, feared autocracy and thought that “in view of the weakness of human nature and of the criminal character of society, democracy offered boundless opportunities for demagogues and charlatans.” One-hundred years later, we are still living in the reality of Conrad’s cynicism and yet, maybe, just maybe, the spark burning in the Black Lives Matter movement has become an unstoppable outrage ignited by George Floyd’s murder. 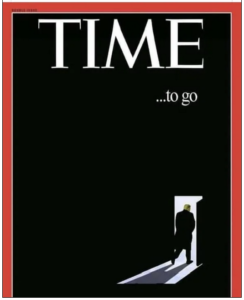 “Fake-news” got it right.

The choice is black and white

Recently, an apparent “fake-news” cover of Time magazine went viral and was another picture worth a 1000 words. It echoed what more than 100 million citizens are thinking … it is time to go. And he will go if there is a bright, white exit created by tens-of-millions of white people, currently sleep-walking through the darkness. White people have to kick down the door and kick this mentally challenged ass out.

More than 100 million eligible voters in America did not vote in the last election – the one Trump won with less than 25% of the eligible voters. That’s both a shame and shameful. It’s the equivalent of kneeling on the neck of democracy.

If a picture is worth a 1000 words, what are 100 million non-voters worth? A knee on the neck of a psycho-neurotic presidency.

There is a simple choice for every black and white and brown person currently protesting in the streets of the joke we call democracy. On November 3rd, don’t just show up and vote. If you truly give a shit, commit to making sure one or two previous non-voters show up with you. Drive them, walk them, push them (if they’re handicapped) to vote. If each person will do that, Donald Trump and his debilitating psychosis will be gone. And it will be a picture worth a 1000 words. Or two words: Fuck off!