Every mayor must foster community spirit and hope …

to measure up to this mayor and his community

The municipal elections are behind us and the rush of community spirit that leads up to elections has subsided, so now is a good time for reflection and self-assessment. To take stock of the state of affairs in our communities. With continuing low voter turnout and high levels of dissonance between elected officials and citizens, we need to find better ways of fostering and sustaining community spirit – all year long, year after year. Because it’s not just the heart and soul of a community, it’s the only strength that sustains well-being and prosperity. Without it we are blown hither and thither by the political winds and short-term whims.

Community spirit can Trump all odds

We’re are all exhausted by Donald Trump, but he’s a blustering red flag of what the spirit of community and leadership is not. Let us all use his ignorant histrionics as a glaring example of the antithesis of what we need in political leadership, human decency and community spirit. He has shone a gaudy, loud, ugly light on a political path that we have been following for much too long – partisan, acrimonious, divisive, discordant, holier-than-thou politicians marching to the drumbeat of autocrat rule. They’ve made a mockery of “representative government.” What’s needed is a new path, a better way, built on our innate values, where the spirit of humanity and community is understood, respected and allowed to thrive – in every county, village, town and city.

“We saw the worst, and the best of humanity … and we showed that human kindness will out do hatred, any day.” – Claude Elliott, Mayor of Gander, Newfoundland 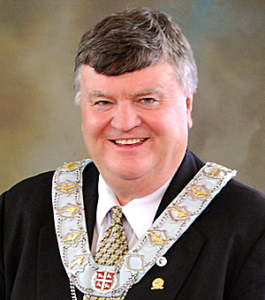 Claude Elliott, the recently retired mayor of Gander, Newfoundland, is the epitome of community leadership, and 9,000 “Ganderites” are the personification of community spirit. Seventeen years ago, they set the benchmark for measuring the depth and breadth of a community’s spirit. And now, their extraordinary “lesson” is available for all to see, experience and better understand.

The genesis of community spirit, as seen in the blood, sweat and tears of “Ganderites,” is, as many of you know, now a Broadway show and a HBO film. It’s a must-see for anyone who is the least bit interested in contributing to their community, and it’s especially important for elected officials, administrative staff and citizen’s groups.

“When the going gets tough, the tough get going.”

Too often it takes a big event to shake us out of our take-it-for-granted view of the world and our take-without-giving attitude. And nothing was bigger than 9/11. But why do we wait for humanitarian catastrophes, natural disasters and five-alarm fires to trigger our indomitable human spirit? Why don’t we rise to the occasion before an emergency?

Is it because we have it too easy? Too good? Have we forgotten the hard times of our predecessors who built the societies we now live in – and off of? Do we think the community spirit that imbued barn raising and the civil disobedience of Henry David Thoreau’s day (see earlier blog: The most important four-letter word) no longer applies to city projects, waterfront plans and town budgets? Do we think it’s right to leave our community’s future in the hands of a few elected officials, town planners and hired consultants? Or do we think we’d have a better community if we had the power of community spirit involved in the ongoing deliberations of our collective needs, plans and activities?

It takes a community

In Gander, in 2001, a terrorist disaster became a call to arms, but when you see the response from “Ganderites,” and hear what they say, you realize that community spirit is not a one-time reaction, it is an innate trait, passed on from generation to generation.

On 9/11, when 38 jumbo jets and 7,000 passengers “come from away” and land on Ganderites’ island, and stay for a week, the local residents knew they would need one helluva plane load of community spirit. Because there was no way they were going to have enough of anything else, from food and beds to blankets and toilet paper.

It’s a magnificent story, which is now recorded for history, for all to see – and learn from. 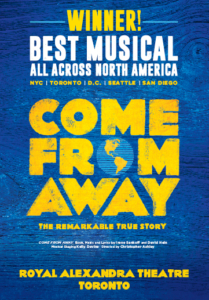 The real story of Come From Away is better than both the HBO movie and the Broadway play, but both are wonderful, uplifting and inspirational.

Every elected official, especially at the local level, should watch one or the other. If they see no other movie or play in the next four years, they should see one of these. It will – except for the few that deny reality – change how they think about community spirit. It should be part of mandatory training for politicians, staff, consultants and citizen’s groups, because community spirit is much more than a catchy phrase, and, unfortunately, it’s conspicuous by its absence in most of our communities. 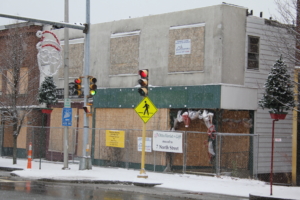 Community spirit is a generational phenomenon, passed down as a way of life, and today, as never before, it’s difficult to maintain in an overly mobile society with aging, small town populations and the increasing emigration of young people to large urban centers. And it doesn’t just happen because local politicians promise to revitalize their hollowed out towns. To renew and sustain, it will require a working coalition of politicians and citizens, and of two generations who can find common ground in shared values: the young who are committed to their future and the older who are committed to letting go of the status quo.

If your recently elected council does not include “younger” people and members who understand the millennial culture, then you’re going to struggle advancing your community. And if your outside citizen’s groups don’t include younger people, they’re going to be irrelevant. BTW, by 2020, 46% of the workforce will be millennials and if you don’t understand the ramifications of this, it’s time to start reading and studying it.

If the “older” generation is not creating coalitions with the younger generation, they are ignoring the future. In the movie, one of the “Ganderites” said, when explaining why they did what they did, “It comes from generations of our people … if we don’t look after each other, we won’t survive.”

It’s in the doing

Community spirit is grounded in the aggregate of people’s values and belief systems, and if those values are not there and not shared, then there is no foundation on which to anchor the requisite community spirit. It simply withers and dies – or moves away. The “older folks” – you know who you are – have to step up and lead by engaging the “younger folks” and handing them the baton.

Just because your community is a collection of people partaking of the commercial benefits of a town, does not make it a community, it’s just an “administrative cooperative,” a small business enterprise, lurching from year to year, election to election, trying to maintain a semblance of order for a disengaged public that is only along for the ride – and hoping nothing gets worse and nothing too big or too bad “comes from away.”

The indomitable human spirit – the source of community spirit – is inherent in most individuals, but it must be recognized, respected, engaged, fostered and called upon – frequently – if it is to be burnished and renewed, and if it’s to be there when needed most.

Think about it … then see the story and start building coalitions of community spirit.