“I was raised to know that I should never …

sacrifice a principle for personal ambition.” Who said it?

Oh, okay, that’s an easy question to answer. But inherent in the answer is a much larger question and a much more revealing answer.

In death, John McCain’s belief in putting principle before personal will not only be amplified but may well write one of his most storied chapters. His memorial and eulogy will place in stark contrast “what ought to be” and “what is,” thereby, allowing millions of people to more deeply understand what matters most in leadership.

“The most essential parts of life are matters of individual responsibility and moral choice.” – David Brooks, author The Road to Character

In his excellent book, The Road to Character, David Brooks explains why a person’s eulogy is far more revealing than their resume. Unlike a resume, one’s eulogy is not about what you achieved for yourself, it’s about what you achieved for others. It’s about your values and principles, not your skill set and score keeping. Inherently, it’s what we humans know matters most.

The out pouring of respect and admiration for Senator John McCain – from candlelight vigils across Europe to flowers where his fighter jet crashed in Vietnam – is not only unprecedented, it is a clarion call for leadership. It’s not a wish to go back in time or that John McCain had become President McCain, it’s an upwelling of human recognition of what one man represents. He embodies great leadership, and when placed in contrast with what we have today, it gives us hope, courage and a sense that, maybe, our lost principles can be reestablished. Because, in his words, “Americans never quit. We never surrender. We never hide from history. We make history.”

If millions of Americans can reach for the brass ring that McCain has left hanging high above the political swamp and act on their visceral understanding of what needs to be done, then history will be made.

The contrast between John McCain and Donald Trump should resonate across America, and the world, and McCain’s death should be a transfusion of courage and purpose into the hearts of Americans, and all of us. It should be a benchmark that proclaims, never settle for less in leaders, never less than what a humble Navy captain, war hero, POW, senator and tireless public servant can give. Never!

You are your roots

Whether looking for leaders of great nations or small communities, we need to look at character, not resume; measure depth, not volume; expect integrity, not bullshit. Leadership can be learned, but to whom a potential leader is born is bedrock. And revealing.

“The apple doesn’t fall far from the tree.” 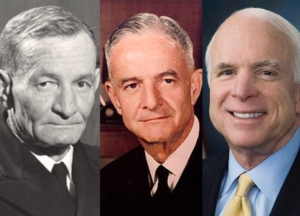 The first place to look in determining what a person’s legacy might be is in their lineage.

John McCain’s life has been a generational arc of service to country, of serving a purpose higher than self. And this quality is both genetic and “nurtured,” growing through parental guidance that builds on the genetic blueprint. Our parents are the primary architects of the scaffolding on which we stand, and John McCain is the personification of a life well built. 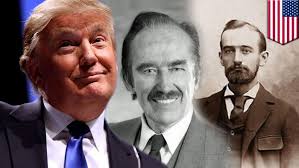 Donald Trump comes from a much different lineage.

Gwenda Blair, in her book, The Trumps: Three Generations of Builders and a President tells the story of Trump’s family origins and their life, adventure and misadventure in the United States.

It’s possible the original family name was Drumpf. Donald’s grandfather, born in Germany in 1869, emigrated to the United States in 1885 as an “unaccompanied alien child.”  Grandfather Trump, after making his fortune, returned to Germany with his family in 1904, only to be deported because he had avoided serving in the military when he was a teenager. Trump family members have repeatedly tried to conceal their German heritage, until recently when Donald admitted his German heritage at the NATO summit in Brussels. But even then, he lied by saying, “My father was from Germany. He wasn’t, Frederick was born in New York in 1905.

“Out of the crooked timber of humanity no straight thing was ever made.” – Immanuel Kant

Comparisons provide us with deep insight – if we choose to see it.

A study in contrasts

We humans see things more clearly and make better decisions when we can compare them, directly. Particularly two things – maybe three – but we struggle to differentiate when comparing more than three. Then we revert to learned patterns and ingrained beliefs and make poorly informed decisions. But when we have a chance to study things side by side, in glaring contrast, the differences are more defined and the choices easier to make.

So the gift that John McCain’s memorial and legacy gives us is an opportunity to see what so many of us know is missing and what we have lost in leadership. Of course, we’ve lost a great man, but as importantly, we’ve already lost, in too many places, what he stood for. The personification of leadership. The black and white of great character.

As a kind of litmus test, here are a few question. You decide whether McCain or Trump made the statement. There is no scoring, other than your judgement as to what constitutes the thinking of a leader of good character. And if the statements seem like blinding glimpses of the obvious, then the reality is obvious. (Correct answers at the bottom). 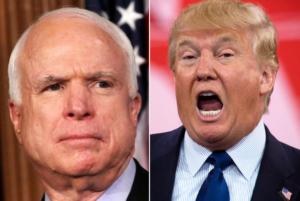 The doers don’t talk and the talkers don’t do

“We need to give the American people what they deserve. And right now, they’re not getting it.” – John McCain

Do we get what we deserve?

I don’t buy the existential idea that we get what we deserve in life, but in many ways it applies in politics, especially in the caliber of leadership we get. And the primary reason our political systems – at every level – don’t work is because “we the people” don’t do what’s required to make them work. We can blame the politicians and the system, but we elect them and we accept the system. Therefore, we get a Donald Trump instead of a John McCain. The US system elected Donald Trump because only about 50% of the voters turned out, with Trump getting less than half, and he won in the antiquated, undemocratic electoral college.

And the political systems are just as ineffective in Canada, at all levels. Prime Minsters, premiers, mayors and councilors are all getting into seats of power with a minority of the vote. There are three, main reasons:

Basically, we don’t give a damn about making a difference or changing much. And we obviously don’t think that finding great leaders is worth the effort. So we get what we deserve.

How can we elect the next John McCain?

Port Hope, ON. Is there a local John McCain?

From every nation to every small town, part of John McCain’s legacy should be to ask the question: Do we want our leaders to have the character that’s more like a Donald Trump or a John McCain? What character traits do we want in our Prime Minister? Premier? Or closer to home, our next mayor and councilors?

Look for character. Demand it! And if it’s not there, join a citizen’s group who will go out and find leaders who have it. Stop settling for less. Stop accepting “what is” and work to achieve “what ought to be.” Remember, it’s not the resume, it’s the strength of character that puts principle before personal – and that is not easy to find. But it’s worth the investment – if you give a damn.

No matter who the candidate, there are a few “dos” and “don’ts” that can help in determining character:

In the small town of Port Hope (population 16,500), the local citizens’ group, Port Hope Citizens’ Association (PHCA) has conducted surveys and published a citizens’ election platform, and they are asking each candidate to respond to the priorities the citizens have identified. This information is then shared with the community and becomes part of the election process. In addition, the PHCA will be producing a “Quarterly Report Card” that measures each elected official’s performance against promises-made and holds them accountable. Great idea! [I will be writing more about this and other active citizen movements in future blogs].

Cobourg, Ontario historic Town Hall where the seats of power need significant change, especially since the mayor is in by acclamation.

There’s a political axiom that says the best way for we voters to manage the affairs of our government is to always vote the incumbents out. Each election. Because we will never get much change if we keep the same people and the same thinking in the same seats. We can impose term limits. But the problem with the execution of this principle is that we always wait too long, waiting until the “bums” have done too much damage (i.e., the GOP in US, Donald Trump, Kathleen Wynne, Mike Harris, Stephen Harper, Jean Chretien, Gil Brocanier, and most multi-term, local politicians).

There is merit in changing up the whole team every election. Of course, the argument against this is that it creates discontinuity. But since the “continuity” approach has been tried for decades and seldom sees the progress we expect – and deserve – is it not time to try the alternative?

After four years, which is a long time in any struggling small community, what could be better that new faces, fresh thinking and the potential, one-term “pressure” to achieve what the citizens expect to achieve in a four-year term? Especially if they have to answer to a quarterly report card.

What could be better than all new? New aspirations. New inspiration. New energy. New thinking. And lots of innovation. Hell, it couldn’t be any worse than the accumulated track record so far.

“Our identities and sense of worth are not circumscribed, but are enlarged by serving good causes bigger than ourselves.” – Senator John McCain 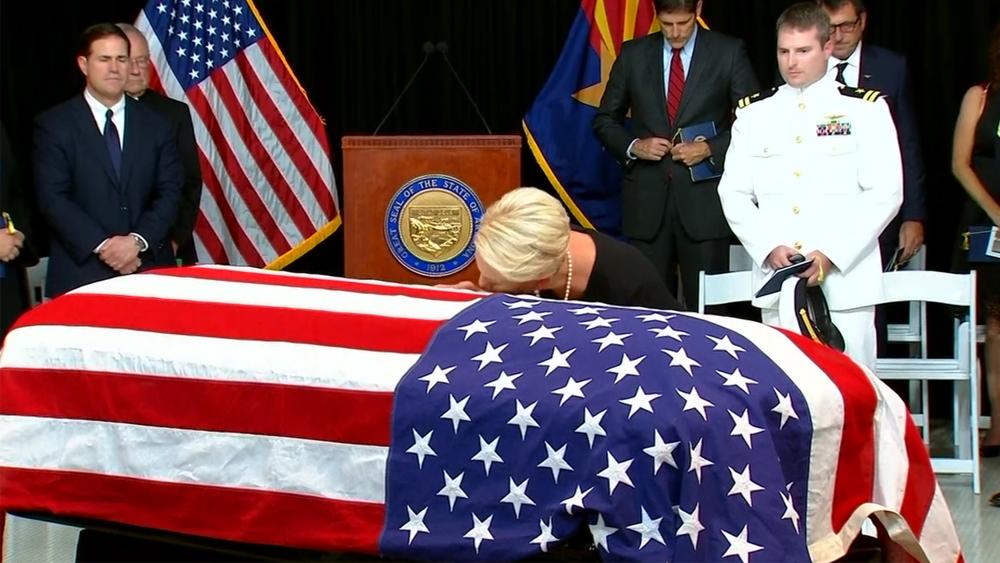